Is my Package Queen laying eggs?

Often in the Spring, I get frantic calls about beekeepers thinking they're Queenless. Many don't see eggs right away, and get frantic searching for the queen. Personally, I don't look for the queen, just fresh eggs. Eggs can be very hard to spot, even if you have good eyes. This can be even more difficult if the fresh (white) eggs are on newly drawn white comb. I do my first hive checks about 10 days after hiving. Up until that point, I just check to make sure that the colony is consistently taking in syrup, that the queen is released within a few days, and that they are not building Burr Comb.

When checking for eggs in the spring, I don't pull all of the frames. It's pretty chilly outside, and I want to get them closed back up quickly, without chilling the young brood. When the queen begins laying, she will start in a circular pattern directly in the center of where the workers are clustered. I start by removing one of the outer frames that they are not clustered on, and setting it aside. I then use this extra space to split the brood nest down the center. I have removed 1 frame, leaving 9 in the box.

Say the bees are mainly clustered on frames 3-8. I would gently slide frames 6-9 to the far side of the box, leaving a gap in the center. If my queen is laying, she should have started on frame 5 or 6, so this is where I start looking. I slide frame 5 into the gap that I've created in the center before pulling it up. Remember your bee space every time you pull a frame! The bees will draw out comb on each frame, leaving just enough room in between for workers to pass back-to-back on the face of each frame. If you pull a frame straight up, you risk damaging workers. If the queen is halfway into a cell when you pull straight up, she can easily be damaged or killed. This is called "Rolling the Queen". Utilize that extra space every time you pull a frame, by sliding it into the open space you've created in the center. Pull frame 5, standing with the sun behind you. I gently blow in the workers right in the center of that frame. Bees do not like the smell of breath, and the workers will move away from the spot you're blowing on. I wouldn't recommend doing this without a veil! As the workers move aside, try to angle the frame so that the sun shines onto the bottom of the cells. Fresh eggs look like tiny grains of white rice, young larvae looks like a tiny white grub that is half curled in a "C" shape at the bottom of the cell. Larvae will have a milky substance puddled around them. This is Royal Jelly, secreted by worker bees, and is the larvae's first food. If I see either of these present, I quickly (and gently) replace frame 5 in it's original location, slide frames 6-9 back into place, and return frame 10. I know my queen is doing her job, and return my focus to feeding.

If I do not see either eggs or larvae, I check the other side of frame 5, and continue on to frame 6 with the same process. A magnifying glass can be very helpful. I also recommend taking pictures with your cellphone if possible. Enlarge them on your computer and you will be amazed at the details you can see, including eggs that weren't apparent. If 5 and 6 have no eggs or larvae, I will repeat the process with frames 4 and 7. If I still do not find any brood, (including taking and enlarging pictures), this colony is marked for a re-check in 4-5 days.  At that time, without evidence of eggs I will introduce a new queen, but not before. Some would suggest stealing a frame of brood from a neighboring colony to give your queenless hive, and allow it to requeen themselves. I do not recommend this option in the early spring. While there may be a few drones present for mating, there likely aren't enough for getting your queen well mated. Additionally, this is the time of year where you want your colony numbers to be quickly increasing in order to reach the critical mass needed to capitalize on the Fireweed bloom. A new queen will take nearly a month to get raised, hatch, mate, and start laying. Raising a new queen will be a significant set back and detrimental to colony population in the long term.

This is a piece of burr comb that appears empty, and a close-up showing eggs. 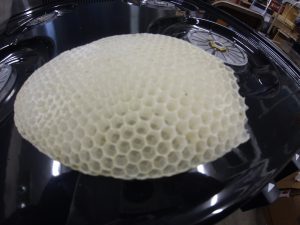 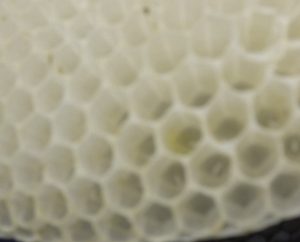 This is a test popup. I wonder how this will look...